On 13 May 2018, Jayne and Helen from Rotary Club of Barrow and Meridian took to the skies and dived back to earth to raise an amazing £2,000 for Headway Humber!

Jayne and Helen did their jump at Hibaldstow near Brigg in North Lincolnshire. At 15,000 feet, this is the highest-altitude skydive in the UK with a descent time of around 3 minutes. 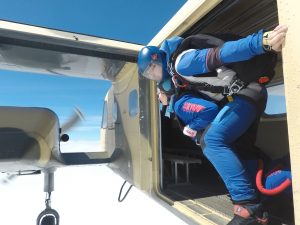 Jayne jumping from the plane

Jayne called in to meet our members and present the cheque to us in September, and took the time to tell us all about her experience. She had never done a skydive before and initially felt nervous, but the nerves went away after she had signed all the forms to go through with it. Strapped to a professional skydiver with a harness, Jayne was the last one to jump from the plane as they circled the drop zone.

Describing the dive itself, Jayne told us that the freefall was the most exciting part – but it was very loud with the wind rushing past. After about a minute, the parachute was opened and she was pulled upwards – she told us that this was a much quieter and peaceful descent, quiet enough for her to even talk to her instructor without any headset. After 2 minutes, it was time to land – on her bum just as she was told to!

Jayne loved the skydive, and although she 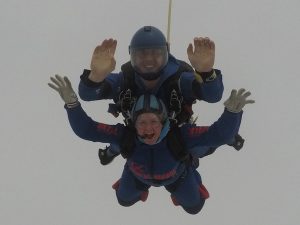 All smiles free-falling from 15,00 feet!

has no immediate plans to jump out of another plane just yet, maybe watch this space!

Thanks so much to Jayne and Helen for thinking of us and for doing such an amazing thing. £2,000 will go a very long way to helping us support people with brain injuries across the region and on behalf of everyone, thank you!