Headway was left unwanted after being kicked in the head by a larger horse while being imported from Argentina in a cargo of polo ponies. The accident paralysed one side of his face leaving him unable to chew properly, meaning he has to eat with his mouth wide open.

He is blind in one eye as he can only blink one eye lid, which led to his open eye drying up and becoming useless. He cannot flare his nostrils, which leads to breathing problems as horses cannot breathe through their mouths. He also had coordination problems as his legs moved in the wrong order, which caused him to regularly fall over at first.

Luckily for Headway, Alison Rowlands, former Treasurer of Headway Hull and East Riding, saw past the brain injury and snapped him up in March 2008 as a companion for her riding horse. Over the following eight months of Alison’s love, care and attention, Headway made great progress and is happy in his new home. His brain even seems to have re-wired itself, which has corrected his balance problems.

At only 9.2 hands high, Headway stands a mere 38 inches off the ground. “Headway is a very friendly pony,” said Alison. “He’s so small I can take him for a gentle stroll into the village like a dog on a lead and he always gets attention, especially from children, which he loves. 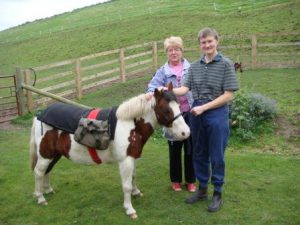 “Whenever he eats, he sprays his food around as not only is one side of his mouth permanently open, but, as he’s blind in one eye, he is always moving his head from side to side to see what’s going on around him. As a consequence it always takes him a while to finish his dinner, but he gets there”.

Headway Hull and East Riding is now using Headway to help raise awareness about brain injury in the region. A special blanket has been made for him, which he wears to country shows to help attract interest to the charity’s information stand. Now that he has regained his coordination, Headway is also being used to give young children short rides, raising much-needed funds.

“Although he looks cute now, Headway was in a terrible state when we first got him,” said Alison. “It just goes to show how Headway the charity can help improve life after brain injury – although we’d prefer to focus on helping humans from now on!”